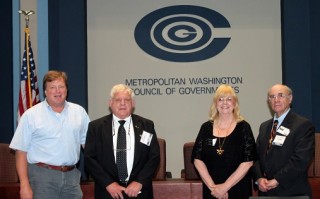 The great outdoors serves as “the office” for our region’s foresters, farmers, horticultural, and landscape professionals, and tick-borne diseases like Lyme pose a threat to these field personnel. However, an improved understanding of tick-borne Lyme disease has helped them to better recognize the risks and protections needed when performing field work.

Caused by the bacterium Borrelia burgdorferi, Lyme is transmitted to humans through infected Blacklegged (Deer Ticks), Dog Ticks, and the Lone Star Tick. According to the CDC (http://www.cdc.gov/lyme/), more than 27,000 cases were confirmed nationwide in 2013. Nine-hundred and twenty-four of those cases were recorded in Virginia, up from 216 cases recorded in 2004. Typical symptoms include high fever, severe headache, fatigue, and a characteristic but uncommonly present skin rash. If left untreated, Lyme can cause more serious long-term and debilitating health problems.

The Community Forestry Network (http://www.mwcog.org/committee/committee/default.asp?COMMITTEE_ID=48) at COG recently brought together field personnel in the region for a forum on Lyme disease. COG Principal Environmental Planner and Urban Forester Brian LeCouteur, points to forest fragmentation in the National Capital Region as one reason for the increase in Lyme cases; small patches of forest creating more “forest edge” of grasses and thicket areas have been found to contain greater populations of infected mice and other rodents, as well as white tail deer. The presence of these animals in these environments leads to higher concentrations of infected ticks. People in more densely populated areas then frequent these green spaces for recreation or other reasons, putting them at risk for tick attachments.

Pathologist Dr. Kenneth Liegner, Lyme Borrelia Outreach Foundation Director Stephen J. Nostrom, and National Capital Lyme Association Executive Director Monte Skall spoke at the forum about the prevention of Lyme, steps to take after a tick attachment, symptoms of the disease, and options for treatment. The speakers expressed concern over the lack of Lyme research funding, and urged attendees to continue to spread the word about the threats that tick-borne diseases pose to the population.

“People in our area still do not understand that [Lyme] can be a serious disease,” said Monte Skall, executive director of the National Capital Lyme Association.

There have been actions taken in the National Capital Region to combat Lyme; the Loudoun County Board of Supervisors launched a ten-point initiative to mitigate Lyme disease in 2012 and most other localities provide information on Lyme disease through their websites. Legislation proposing funding for Lyme research has also found its way to Congress. In June of 2015, Johns Hopkins University announced the formation of the first U.S. Lyme Disease Clinical Research Center to study the disease and specifically, chronic Lyme disease.

Dr. Liegner called for continued cooperation, creativity, and collaboration on this issue among citizens and decision-makers alike. (http://hub.jhu.edu/2015/05/26/lyme-disease-research-center)

“We still have not fully understood what Lyme disease is and what it can do,” said Liegner, who has spent a large part of his career treating Lyme. “We’re only 40 years into studying Lyme and there is still a lot to learn.” (http://hub.jhu.edu/2015/05/26/lyme-disease-research-center)