NatCapLyme > Events > Learn the Latest on Lyme & Other Tick-Borne Diseases 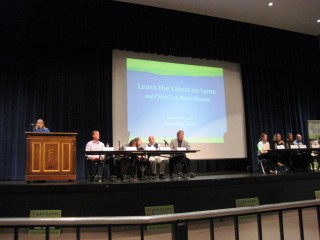 Learn the Latest on Lyme & Other Tick-Borne Diseases Dr. Joseph Annibali is Chief Psychiatrist at the Amen Clinics in Reston, Virginia. His passion for the mind as well as the brain led him to graduate with honors from multiple educational institutions and to train as a traditional psychoanalyst. He had a successful practice in McLean, Virginia for many years. Although he was helping a great number of people, he realized that he could not help some patients despite his best efforts. Something seemed to be missing. After reading Dr. Amen’s books and attending one of Dr. Amen’s seminars in 2007, Dr. Annibali knew that brain SPECT scans were the missing piece that he had been seeking. Once he began to scan the brains of those patients, his ability to recommend the right treatments for the right patients improved dramatically.

Located on the east coast where Lyme disease has reached epidemic proportions, Dr. Annibali has seen more SPECT scans on Lyme patients than almost anyone else in the world. Not only is Dr. Annibali Lyme literate, but he also understands the suffering that people with Lyme go through – his own daughter has been suffering from Lyme disease for the last 14 years, perhaps longer.

“My daughter, who is now 26, had been sick for many years. She had a bad case of mono when she was 12 and never fully recovered. I suspect that she had been exposed to Lyme prior to that and fought it off until she had mono, which also suppresses the immune system. That is when the Lyme bug really took over.”

Dr. Applegate is a child clinical psychologist with specialties in both school and pediatric psychology. She serves as the Supervisor of Diagnostic and Prevention Services for Loudoun County Public Schools, where she oversees all psychological services provided by the school system. Her school psychologists routinely consult with her regarding students with tick-borne infections.

Undiagnosed with Lyme disease for years, she eventually received an accurate diagnosis and was successfully treated. This experience facilitated her interest in Lyme disease and prompted her to focus on the psychological and cognitive sequelae of tick-borne infections. Her research and clinical experience suggests that the cognitive effects of Lyme disease in children and adolescents can easily mimic learning disabilities, with easily identifiable patterns and academic implications. In 2011 she was invited to serve on the Governor’s Task Force on Lyme disease and found this experience both rewarding and eye-opening. She is routinely invited to give talks on the psychological implications of Lyme disease to diverse audiences.

As a Howard Hughes Medical Fellow, Dr. Cornish conducted translational research at the National Human Genome Research Institute of NIH. She was an apprentice in the laboratory of Francis Collins, M.D. Ph.D., the current director of NIH. Under his leadership, she analyzed genetic associations of chronic illnesses.

Dr. Nancy Fox, recognized author of Tick-borne Diseases: An Evaluation of a Lyme disease Prevention Education Program for Eight, Nine, and Ten Year Olds (2009), No Ticks, Please (2011), and Hide-and–Seek: No Ticks, Please (2014), is a National Board Certified Teacher, Life Strategist, and speaker. She has been an educator for more than 20 years. She is an advocate for student learning and equitable access to knowledge and decision-making processes. Dr. Fox has used her skills and experience to create a K-12 Lyme and Tick-borne Disease Prevention & Awareness Curriculum.

Tara Fox serves as pediatric nurse practitioner in the Jemsek Specialty Clinic, located in Washington, D.C., and treats patients from infancy through their young adult years. Tara completed her undergraduate studies at Virginia Polytechnic Institute and State University (Virginia Tech) in Blacksburg, VA, and received a Bachelor of Science degree in Biological Sciences. She continued her education at Vanderbilt University in Nashville, TN, where she received a Bachelor of Science degree in Nursing, and went on to complete her master of science in Nursing. Tara joined JSC in early 2011 and received training not only from Dr. Jemsek but also from Dr. Charles Jones, a Lyme-literate pediatrician in Connecticut.

Lance A. Liotta co-founded the Center for Applied Proteomics and Molecular Medicine (CAPMM) at George Mason University in 2005. CAPMM is committed to improved, early disease diagnosis, developing individualized and more effective therapies, and creating a new paradigm for personalized patient care. The primary emphasis of disease research is cancer, but new therapies and diagnostics developed in the center apply to cardiology, diabetes, and obesity, as well as liver, ocular, neurodegenerative, and infectious diseases.

Kate Sheridan is a graduate of Oakton High School and a freshman at George Mason University studying psychology. Kate was diagnosed with Lyme disease at the age of eleven and went into remission after six years of treatment. During her treatment and recovery from Lyme, she developed a series of coping skills involving art, crafting, and music. Despite experiencing severe disability, Kate was able to graduate high school in five years, during which she became certified as an emergency medical technician, completed a course in AP art, restarted playing piano, and was head coach of a middle school basketball team. In addition, she was a supervisor at Zinga Froyo. During her treatment, Kate experienced a series of different pediatric medical facilities and would like to find a career where she can use those experiences to improve care for children.

Joshua Smith is an Environmental Health Specialist with the Fairfax County Health Department.

Steve Thomas is a Fairfax County educator and Lyme disease survivor whose chronic pain and neuromuscular deterioration was misdiagnosed from 2005-2009 by some of the best doctors in Washington, D.C., and San Francisco. He had two unnecessary back surgeries, a knee surgery, and was then told by two doctors he had ALS (Lou Gehrig’s’ disease), basically a death sentence. Neurologists were baffled by his array of symptoms, pain, and deterioration; they simply treated him for pain. Steve finally learned about Lyme disease by searching the internet, and thanks to aggressive, long-term antibiotic treatment by a Lyme-literate medical doctor, Steve has gained back much of the active life he had lost. Steve is motivated to share information about Lyme disease, because it cost him and his family dearly. He quit teaching for two years due to debilitating pain, and the loss of income and stress on his family was immense. If it had not been for doctors thinking outside the CDC and IDSA guidelines “box,” he would still be sick and likely in a wheelchair. Steve’s total medical costs for undiagnosed Lyme disease and subsequent treatments/surgeries from 2006-2009 were close to $200,000. If there had been greater awareness within the medical community and proper treatment guidelines in place, an earlier diagnosis might have resulted in less cost, as well as minimal personal pain and suffering.

Monte Skall is Executive Director and founder of the National Capital Lyme and Tick-Borne Disease Association (NatCapLyme), a non-profit organization dedicated to Lyme and tick-borne disease education, prevention, research, and patient support. Bitten by a tick in 1991, it took seven years and more than a dozen doctors, including a trip to the Mayo Clinic, before Monte was diagnosed and treated. During the past 15 years, she has fought for the rights of Lyme patients, a journey that has made her a nationally recognized leader in the Lyme patient advocacy community. Under Monte’s guidance and leadership, NatCapLyme has grown to include chapters throughout Virginia, and in Maryland, North Carolina and the District of Columbia.

Monte has testified, lobbied and educated at all governmental levels about Lyme and tick-borne diseases. She served on state and county task forces in Virginia and Maryland that studied Lyme and tick-borne diseases and partnered on prevention projects with local county Health Departments. She has also worked with Federal government agencies including the Centers for Disease Control and the National Academy of Science’s Institute of Medicine. She speaks frequently at area clubs and associations on the topics of Lyme disease awareness, prevention, and treatment. She has been a hospital trained support group facilitator at Sibley Memorial Hospital since 2001, helping patients and their families cope with Lyme and tick-borne diseases. Before Lyme, Monte was a professional artist and art teacher. She earned a Master of Fine Arts degree from George Washington University in Washington D.C.

Marjorie MacArthur Veiga is the author of My Lyme Guide -Tips & Tools to Manage Lyme & Associated Illnesses and the founder of My Lyme Guide. She is a former senior product manager for Verizon where she worked while establishing a women’s non-profit health organization.

Mrs. Veiga and her daughter have battled Lyme and babesia for a combined 20 years. She has attended many Lyme and health conferences and seminars and has spoken frequently on the topic of how to manage chronic illnesses practically and emotionally. Marjorie started and led support groups for Lyme families in Loudoun and Fairfax Counties. She served on the board of NatCapLyme as a support group leader, fund raiser, and media relations volunteer. She resides with her family in Fairfax County. Mrs. Veiga initiated the program “Learn the Latest on Lyme” to bring education on the topic of Lyme and tick-borne diseases to schools throughout Fairfax County.