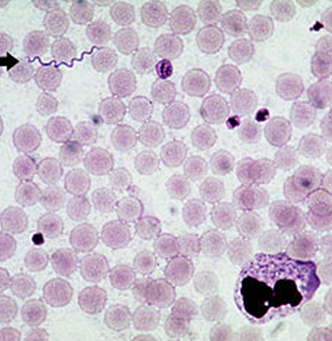 Borrelia miyamotoi is a spirochete that causes a syndrome similar to tick-borne relapsing fever (TBRF). It is transmitted by the black-leggedIxodes tick, which is also implicated in the transmission of Lyme disease, babesiosis, and anaplasmosis.

This pathogen was first discovered in Japan in 1995, but has since been identified in other parts of the world. In 2011, human infections withBorrelia miyamotoi were reported in Russia, and subsequently in the United States, Europe and Japan. Symptoms are not yet well-described, but most patients experience fever, headache, fatigue, myalgia, arthralgia and nausea.