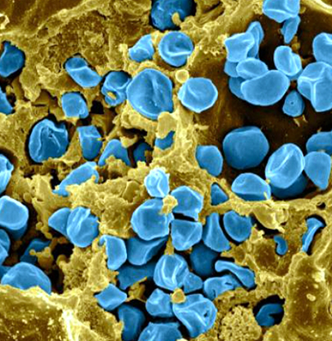 Tularemia is caused by the Gram-negative intracellular bacterium Francisella tularensis. This disease infects both humans and animals, but is particularly devastating to rabbits, hares, and rodents. It is spread via ticks, deer flies, contact with infected animals, ingestion of contaminated water, and inhalation of infectious droplets. Tularemia is naturally occurring, but its ease of transmission through aerosol classifies it as a bioterrorism warfare agent. Symptoms of this disease vary and depend on the pathogen’s mode of entry into the body. Nevertheless, all forms of tularemia present with fever.

Tularemia can be difficult to diagnose because its symptoms mimic other diseases. For this reason it is imperative to share with your doctor any risk factors, such as tick bites or exposure to livestock. Tularemia is confirmed with blood tests and culture, and treated with antibiotics.