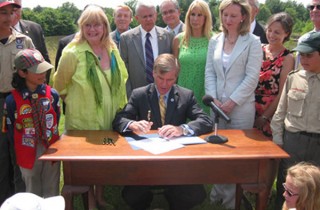 Surrounded by legislators and community leaders, Governor Bob McDonnell ceremonially signed today HB1933, the Lyme Disease Testing Information Disclosure Act of 2013. The legislation makes Virginia the first state in the nation to require health care providers to notify those tested for Lyme disease that current laboratory testing can produce false negatives, especially in the early stage of the disease.

Speaking today about the bill signing, Governor McDonnell, “This legislation is a major milestone in the fight against Lyme disease and an important step towards ensuring the continuing health and welfare of Virginians. We must continue to work together to make certain that all Virginians are properly educated on the dangers of Lyme disease.”

Delegate Barbara Comstock states, “When the Lyme Disease Testing Information Disclosure Act goes into effect on July 1st, we will have a patient-centered solution that gets information about testing problems directly to those suffering from Lyme Disease so they can seek additional testing, if necessary, as well as appropriate treatment. I would like to give a special thanks to Governor McDonnell for his support of this legislation and to the National Capital Lyme Disease Association for their grassroots commitment to ensuring that this effort was a successful one.”

Monte Skall, Executive Director of the National Capital Lyme and Tick-borne Disease Association, adds that “With the passing of the Lyme Disease Testing Information Disclosure Act of 2013, Virginia has established itself as a leader in the fight against this dreadful disease and serves as a model for state action across the country.”

Today’s bill signing was held at Claude Moore Park in the heart of Loudoun County, Virginia. Speaking on behalf of the Board of Supervisors and the Loudoun County Lyme Disease Commission, Chairman York says “I am very pleased that Governor McDonnell has chosen to sign this important bill here in Loudoun County as our Board of Supervisors continues its aggressive approach in slowing the rate of Lyme disease with a 10-point-plan to mitigate this devastating illness. We have taken an aggressive approach to slowing the rate of the disease by raising awareness and educating residents on prevention measures in that we had 219 recorded cases of Lyme disease in Loudoun County last year.”

Lyme disease is the most commonly reported vector-borne illness in the United States. The Virginia Department of Health reports that there were an estimated 1,110 cases of Lyme disease in the state in 2012, up 9 percent from 2011. Cases were reported in all regions of the state.