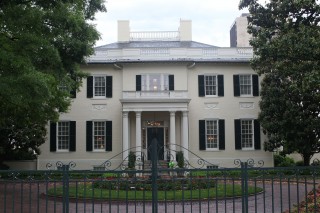 RICHMOND Governor Bob McDonnell has made the fight against Lyme disease a priority in his efforts to protect the health of Virginia citizens. To further that effort, the governor is recognizing May as Lyme Disease Awareness Month and will light the Executive Mansion lime green Thursday, May 16 to commemorate the observance.

The governor worked closely with the General Assembly this year to pass the Lyme Disease Testing Information Disclosure Act of 2013, a major milestone in the fight against Lyme disease. Virginia is now the first state to require health care providers to notify anyone tested for Lyme that current laboratory testing can produce false negatives, especially in the early stage of the disease.

In concert with the lighting of the Executive Mansion, Virginia’s First Lady, Maureen McDonnell will place a large lime green bow on the governor’s residence gates. The bow was given to the residence by the National Capital Lyme Disease Association, a Virginia 501(c)(3), to further its campaign of public awareness of this serious disease and its related co-infections.

Lyme disease is the most commonly reported vector-borne illness in the United States. The Virginia Department of Health reports that there were an estimated 1,110 cases of Lyme disease in the state in 2012, up 9 percent from 2011. Cases were reported in all regions of the state.

The National Capital Lyme Disease Association (NatCapLyme) is an organization with over 3,000 members, including 15 chapters throughout Virginia, the District of Columbia, Maryland, and North Carolina.

For more information about Lyme disease, please contact Monte Skall at 703-821-8833 or visit the NatCapLyme website at http://www.natcaplyme.local/.