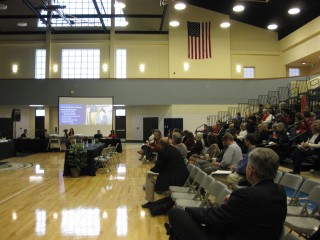 A 12-member panel comprised of healthcare experts heard testimony from ten witnesses* ranging from fathers whose children were misdiagnosed as mentally ill to doctors discussing the financial impact of Lyme in Virginia. Michael Farris, chairman of the Task Force, said “For the first time we’re creating a useful record of current and quantifiable information together with the divergent views of patients, doctors and researchers in a forum where they can hear and consider each others’ perspectives.”

*See panel and witness composition at end of release

Monte Skall, Executive Director of the National Capital Lyme Disease Association, and a member of the panel said, “Chronic Lyme patients often feel abandoned by medicine. We’re realizing our dream of bringing together experts that treat infectious disease, researchers and the real victims of chronic Lyme and its co-infections in the hope of finally making real progress for the treatment of this disease.”

Dr. Daniel Cameron, former president of the International Lyme and Associated Diseases Society, estimated a chronically ill Lyme patient’s annual medical costs for treatment of Lyme and co-infections to be $16,200, bringing the total cost to Virginians to about $67 million annually. Dr. Marty Schriefer, Chief of Diagnostic and Research section at the Centers for Disease Control, traveled from Colorado to share his knowledge with the panelists. “In 2009 there were 232 cases of Lyme disease in Fairfax County and another 201 in Loudoun County,” he said. Mr. Farris expressed concern the CDC surveillance data actually under-report incidence and prevalence based upon narrow case definitions and the lack of effective reporting requirements.

Five fathers and one mother testified to the emotional and financial toll on families. Peter Demitry, a physician, former Navy test pilot and father of ill children received a standing ovation from the audience when he spoke emotionally of the contrast between the early health-filled years of his family and the nine years following his teenage son’s tick bite. He said “Lyme moms” and his own patients “taught me more in two years than I’d learned practicing orthodox medicine in twenty.” Eric Tibbetts, Retired Captain- US Navy, spoke of errors made in his son’s care and urged more effective adoption of procedures for earlier Lyme and co-infection diagnoses.

The final speaker was Dr. Paul G. Auwaerter representing the Infectious Diseases Society of America. A Johns Hopkins University clinical researcher, he detailed the complexities of diagnosing and treating Lyme. “We have more bacterial cells in our body than human cells,” he said. In addition to the two expert testimony hearings, a series of five geographically-organized “listening forums” will be conducted to gather the testimonies of patients and caregivers. These forums will be held over the course of 2011 in Northern Virginia, Norfolk, Richmond, Roanoke and Harrisonburg. The output of the expert hearings and patient forums will be developed into recommendations for Governor McDonnell’s consideration.

The next hearing will be held in Richmond on January 21 from 1-4PM.

All hearings are free and open to the public.