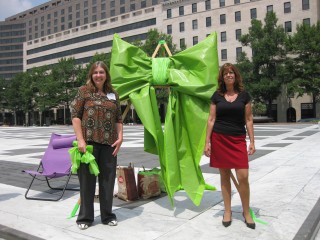 Why the Lime Green Ribbons in D.C.?

(Washington, D.C., July 29, 2009) – The Lime green ribbons represent the hidden epidemic of Lyme disease.  Lime green ribbons will be tied around “the old oak tree,” on fences and posts all over Washington, D.C. and other cities around the world on Wednesday, July 29, 2009 to spotlight an historic hearing the next day to review the controversial Lyme disease treatment guidelines.

The Infectious Diseases Society of America (IDSA) will conduct a hearing of 18 speakers on Thursday, July 30, 2009, in the Ronald Reagan Building from 8 a.m. to 5 p.m.   The hearing will be a watershed moment in the continuing debate surrounding the medical treatment of Lyme disease.  Many seriously ill Lyme patients say that the guidelines prevent the proper diagnosis and treatment of the diseases.  If the disease is misdiagnosed or insufficiently treated, patients can develop on-going or chronic illness.   Lyme disease is the fastest growing infectious disease in the United States.

The hearing is part of a 2008 settlement agreement in an antitrust lawsuit brought by Connecticut’s Attorney General Richard Blumenthal.  The lawsuit charged that the panel that established the IDSA guidelines for Lyme disease was biased by conflicts of interest and adopted flawed guidelines that prevent many patients from getting adequate treatment.  The settlement included an agreement that the IDSA would create a new panel to review its guidelines.

Doctors who have treated Lyme disease with long term antibiotics beyond the IDSA guidelines have been targeted by medical boards and insurance companies and have lost their licenses to practice medicine.   Only Connecticut and Rhode Island have physician protection laws that permit physicians to determine what treatment is best and, in effect, overrule the current IDSA guidelines.  The increasing number of patients who have been helped by long term treatment is strong evidence of the need for the IDSA’s Lyme Disease Review Panel Hearing.

The media is invited to a Lyme Watch Media Center, where they can interview patients, advocates, and doctors in response to the webcast hearings. The Center is in the Congressional Room on the lobby level at the J.W. Marriott Hotel, 1331 Pennsylvania Ave. NW, from 8am to 5pm. on Thursday.