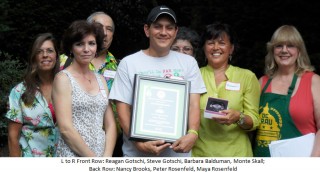 Monte Skall, NatCapLyme Executive Director commented, “We celebrate you for enabling NatCapLyme with the means to help others dealing with tick-borne diseases.”   Steve Gotschi said, “I am very grateful to all volunteers, runners, walkers, and all the others who attended and made this an unforgettable event.”

The Loudoun County Health Department now recognizes Lyme disease as an epidemic in their region and is working on initiatives to combat the problem.  Earlier this year the Board of Supervisors stated, “Loudoun County has been called one of the most active Lyme epidemic areas in the country.”   The supervisors created a Lyme Disease Commission to focus on education and prevention efforts.  NatCapLyme expressed support for this committee’s efforts by offering to partner with the Board of Supervisors and the Loudoun County Health Department in a tick drag and testing project matching funds dedicated to this project, dollar for dollar, up to $5,000.  According to Skall, “By officially acknowledging the problem and adding definition to it through the knowledge that a tick drag can bring, county residents will be encouraged to seek education and to treat tick-borne diseases seriously.”

September 30, 2012, NatCapLyme, www.natcaplyme.org, will inaugurate a patient/caregiver support and education chapter in Loudoun County.  The group is open to all who suffer from this disease and those who play a supportive role in their lives, or are just concerned about Lyme and the devastation it can create.  The meeting will be held in downtown Leesburg at the Cornwall location of the Loudoun County Hospital, the last Sunday of each month from 3 to 5 p.m.

Carol Dupuis, a native of Virginia, will facilitate the group meetings.  Carol’s teenage daughter is in treatment for Lyme after a five-year struggle with the disease and co-infections.  Carol has met many people of all ages afflicted with the disease and is inspired to help others gain a better understanding of tick-borne diseases and provide them an opportunity to meet others.