NatCapLyme > NatCapLyme To Sponsor Briefing, Luncheon For Members Of Congress 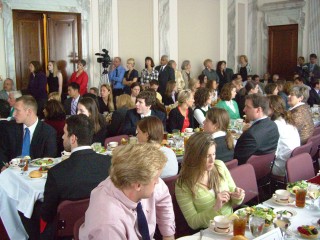 NatCapLyme To Sponsor Briefing, Luncheon For Members Of Congress

The National Capital Lyme and Tick-Borne Disease Association will sponsor an educational briefing and luncheon for Members of Congress and their staffs regarding Lyme and tick-borne diseases on Wednesday, September 24, 2008 from 12 noon to 1:30 p.m. in Room 385 of the Russell Senate Office Building.

The purpose of the event is to raise awareness of the tremendous increase in cases of Lyme disease and its cost in terms of human pain and lost productivity.  The U.S. Congress has not held hearings in more than a decade, and the issues in the medical community concerning diagnosis and treatment make it a health concern of major importance.

Three experts in the field will be on hand to participate in the briefing.  First, Andy Abrahams Wilson, director of Under Our Skin, a new award-winning documentary film, will join us from California to explain the importance of developing public awareness of these wide spreading and serious diseases.  Guests attending the briefing will see segments from the documentary, which has been the subject of major media attention.  A full-length screening of the film will follow on the next evening, September 25, at the Avalon Theater, 5612 Connecticut Avenue, Washington, D.C. 20015.

The event sponsor, National Capital Lyme and Tick-Borne Disease Association, www.natcaplyme.org, is a greater Washington, D.C. non-profit organization that has been devoted to increasing education and awareness as well as the support of Lyme disease victims for the past twelve years.

Seating is limited, members of the public wishing to attend must reserve seating at 703-821-8833.

Media are welcomed and encouraged to attend.

Sponsorship information may be found on the web site.