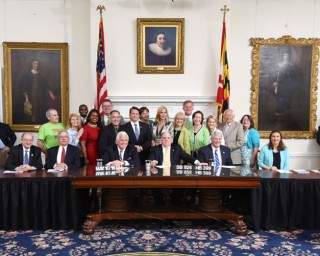 The law requires health care providers and medical laboratories that draw blood for a Lyme disease test to give patients a written statement explaining that current testing for Lyme disease can be problematic and that a negative result doesn’t necessarily mean you don’t have the disease.

“It is with great pleasure that I am finally bringing this bill home to help the people of the state where I reside,” said Susan R. Green, National Capital Lyme Disease Association’s (NatCapLyme) legislative counsel and one of the original architects of the bill. “It has been a long time coming,” she added.

“This bipartisan bill is historic and demonstrates that Lyme advocacy cuts across all interests and affiliations,” said Monte Skall, executive director of NatCapLyme.  “We could not have succeeded without the community coming forward in unity to support this bill.”

Lyme disease is the fastest growing vector-borne infectious disease in the United States, with the Centers for Disease Control estimating more than 300,000 new cases a year, although many experts believe that the actual number is much higher. The number of confirmed cases in Maryland is rising steadily. Because early recognition of Lyme disease is so crucial to successful treatment, this patient notification bill has the potential to change many lives.

“It’s days like this that remind me why I ran for public office in the first place,” said Delegate Kathy Afzali (R-District 4), co-sponsor of the House bill. “If I have helped one person avoid this awful disease, then it’s all been worth it.”

“We are very hopeful that this measure will inform both patients and physicians of the potential for inaccurate test results,” said Delegate Karen Lewis Young (D-District 3A), a co-sponsor of the House bill. “This alert may lead to earlier diagnosis and a better chance of recovery,” she added.

The number of reported Lyme disease cases has increased 25-fold since 1982, when national surveillance of Lyme began. Fewer than half of diagnosed patients recall a tick-bite or rash, which can lead to more and more people getting and remaining sick.

“I’ve had several friends who had Lyme disease that went undetected until serious damage was done,” said Senator Ronald Young (D-District 3) and co-sponsor of the Senate bill. “One lifelong friend spent the last years of his life in a nursing home not recognizing his family or friends. I am pleased that people will now be notified that the tests may show false negatives and that they should consult their physicians if symptoms persist.”

“I am pleased to have co-sponsored this Lyme bill with Senator Young. The fact that the legislation passed unanimously in both the Senate and House of Delegates demonstrates a strong commitment to act decisively to assist Marylanders who suffer from this insidious disease,” said Senator Brian Feldman (D-District 15).

NatCapLyme will be eternally grateful for lobbyist, Gil Genn, whose relentless pro-bono work and unswerving commitment made this law a reality.

The Lyme Disease-Laboratory Testing-Required Notice law is a broadened version of Virginia’s landmark law of 2013, and NatCapLyme is encouraging all states with a prevalence of Lyme disease to pass legislation modeled on the new Maryland law.