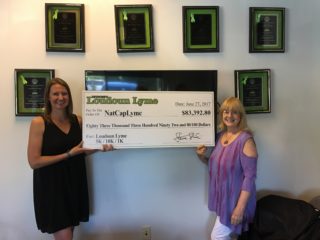 On May 7th, more than 1,500 runners and walkers from 18 states and the District of Columbia participated in the Seventh Annual Loudoun Lyme 10K/5K/1K, making it the largest race for Lyme disease awareness and funding in America.

The race at Brambleton Town Center in Ashburn, Virginia netted close to $84,000, which will go to crucial Lyme disease research and prevention and educational programs.

The Loudoun Lyme Run is the brainchild of DryHome Roofing and Siding’s President, Steve Gotschi.  Seven years ago, Steve approached NatCapLyme wanting to help raise money and awareness for Lyme disease, and the rest as they say, is history.

“This year’s run was especially important in highlighting the needed public awareness about Lyme disease, which impacts more than 300,000 people annually. In fact, Lyme disease is the number one vector-borne infectious disease in the United States,” said National Capital Lyme Disease Association’s (NatCapLyme) Executive Director Monte Skall. “A special “shout-out” and thank you to Steve at DryHome, all the sponsors, vendors, and participants who came out and made the 2017 run for Lyme the biggest and best yet!”

“I want to thank all those who participated in this year’s run for their support of those suffering from Lyme disease, said Gotschi. “Our community truly comes together each year to give hope and encouragement, and fund research and education. This year’s race was a great success, and with 18 states participating, this demonstrates the broadening concern about Lyme disease throughout the United States.”

U.S. Representative Barbara Comstock, a member of the Congressional Lyme Disease Caucus, presented a certificate of congressional recognition to Steve Gotschi for his efforts to increase awareness of, and help find a cure for, Lyme disease. The local officials who presented were Virginia Senator Dick Black (R-13) and Blue Ridge Supervisor Tony Buffington Jr. We thank them all for supporting the Lyme community.

Mark your calendar for next year’s 8th Annual Loudoun Lyme Run in May of 2018!