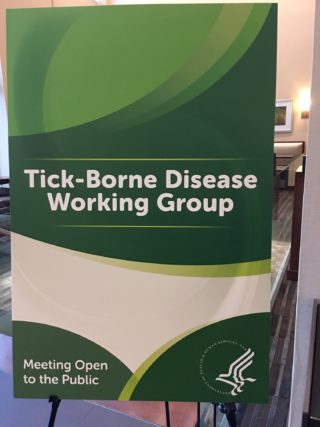 Good morning. My name is Gregg Skall and I am the legal counsel for the National Capital Lyme Disease Association, also known as NatCapLyme. I was privileged to provide a keynote address for the inaugural Tick-Borne Disease Working Group conference in December of 2017, and in 2010, I was a panel member on the Institute of Medicine’s (IOM) workshop titled, Critical Needs and Gaps in Understanding Tick-Borne Diseases.

As someone who has been extensively involved in the Lyme community for more than three decades as well as a caregiver to a Lyme patient, what is most distressing about the current state of affairs regarding Lyme and tick-borne diseases is that the medical community is still so strongly divided on every aspect of this disease. Even more distressing is that Lyme disease was officially identified in the 1970’s, but yet, even after 40 years, the medical community still has limited knowledge of how to effectively diagnosis and treat this disease. Conversely, HIV emerged as a fatal infectious disease around the same time, yet today it is now considered a treatable disease offering most HIV patients a normal life span. If this progress can happen with HIV, why can’t it happen for Lyme and tick-borne diseases?

After decades of neglect by federal health authorities, on December 23, 2019, the President of the United States signed into law the Kay Hagan Tick Act, which when appropriated by Congress provides a total of 150 million dollars in funding over five years to combat tick-and-vector-borne diseases. Should this funding eventually happen, the important question here is: “who will get the money?” That is, how much of the funding will go towards Lyme disease, as opposed to funding for less common but more publicized vector diseases associated with mosquitos like Zika and West Nile. We feel it is imperative to have government-funded research studies address the persistent forms of Lyme and tick-borne diseases, in addition to the other pertinent research projects. We further believe that the growing multitude of persistently ill tick-borne disease patients warrants these un-biased federally-funded research studies that will hopefully result in effective diagnosis and treatment alternatives for Lyme and tick-borne disease patients.

While the Infectious Diseases Society of America (IDSA) does not recognize persistent Lyme disease in its practice guidelines, the number of cases of Lyme each year continues to grow exponentially. Not only are we seeing an explosion in the number of reported cases in the U.S., but we are also dealing with a global pandemic. The latest data indicate that there are approximately 427,000 new cases of Lyme each year in the U.S. While some individuals respond to a standard course of antibiotics, far too many patients remain sick the rest of their lives with the persistent form of Lyme. Funding MUST be allocated by NIH for a non-bias research study to determine how to help, if not cure, these patients so that they can regain their health.

While NatCapLyme recognizes that government-funded research studies on diagnostics, prevention, tick behavior, and habitat analysis are important to the overall understanding of this epidemic, we feel strongly that the research funding MUST go to clinical trials made up of patients with the persistent form of Lyme borreliosis, given that these patients are at the heart of the Lyme controversy. Moreover, these trials need to broaden the entrance criteria to include entire classes of Lyme patients whose disease expression and treatment responses are poorly understood. Research grants for tick-borne infections should be based on a non-biased approach. Given the recognized controversy over diagnosis and treatment of Lyme and tick-borne infections, priority should be given to fund new researchers with innovative ideas and methods that would help to settle this controversy.

What needs to happen is to bring together the best minds and best theories of ALL parties, and require that ALL theories be examined and considered to facilitate the development of such important steps forward. True solutions to the dilemma of Lyme and tick-borne infections may be found only when all parties are willing to consider the views that each party holds.

In my prior presentation to the Tick-Borne Disease Working Group at the end of 2017, I had a few concluding remarks that I would like to reiterate again to the group.  I repeat,  once again that NatCapLyme believes that it is crucial that Congress as well as the medical and research communities recognize the complexity of these diseases and the burdens they impose on individuals, families, and society at large. The long-term effects of persistent Lyme disease can last a lifetime, so it is incumbent upon us all to find answers so that generations to come will not be afflicted by them.

Lyme and other tick diseases erode every facet of an individual’s life, decimate marriages and livelihoods, cause children to leave school and lose their childhoods and for some, lead to death. For many patients, life never returns to normal, as they must accommodate activity restrictions and ongoing health concerns into their everyday routines. It is shameful that so many people suffer for lack of an accurate diagnoses or effective treatment. Our masses are growing by the tens-of-thousands each year so this problem is not going away until all parties are invested in creating real solutions that benefit all patients, and society as well. And despite being sick, in pain, exhausted, frustrated, and financially drained, NatCapLyme and many others in the Lyme advocacy community are committed to this cause and will not stop until we regain our health, halt this epidemic, and ensure that these terrible tick-borne diseases do not burden future generations.