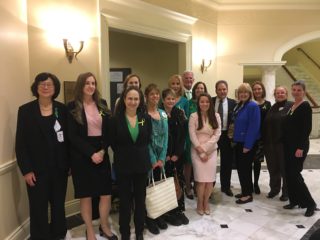 NatCapLyme would like to thank all those who supported and worked towards the passage of Maryland bills HB 880 and SB 793, which were introduced in the 2018 legislative session.  We are grateful to Delegate Karen Lewis Young (D-3A), Senator Brian Feldman (D-15) and other co-sponsors of these bills for introducing this legislation that required insurers to cover long-term antibiotic treatment of Lyme disease and similar persistent tick-borne illnesses. HB 880 and SB 793 did not necessarily promote long-term antibiotics, but rather, promoted doctors and patients determining the most effective care for the treatment of Lyme and other tick-borne illnesses, as opposed to care decisions made by profit-focused insurance companies. Unfortunately, the bill did not make it out of committee, but garnered support from 38 co-sponsors, including a dozen members of the House’s Health and Government Operations Committee. Such a fate is not uncommon for newly introduced legislation in its first year before the governing body.

Many voices spoke in unity and our community came together in a powerful way. Strong witness testimony, supporting all aspects of these bills, provided ample evidence for the need of the passage of such important Lyme legislation given Maryland has the sixth highest rate of Lyme disease, according to Lewis Young, and nearly two-thirds of those with the disease will need more than a month’s worth of treatment.

As special thank you to NatCapLyme’s legislative counsel, Susan R. Green, Esq., for her tireless efforts and unrelenting passion to help those suffering from Lyme and other tick-borne disease.