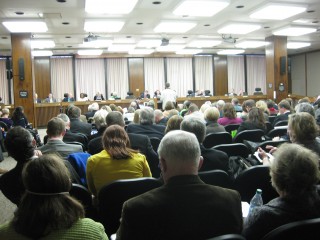 Bill 1933 requires doctors to inform patients of the limitations of tests for the tick-borne disease.

RICHMOND — The House of Delegates on Tuesday put the finishing touches on legislation that would require doctors to provide patients with information about the limitations of existing tests for Lyme disease.

House Bill 1933 now goes to Gov. Bob McDonnell, who appointed a task force in 2010 to explore prevention and treatment of Lyme, the sixth-fastest growing disease in the United States. The panel later called for better public education and outreach about Lyme and a more open-minded approach by the medical community to diagnosing and treating the tick-borne illness.

Advocates for Lyme patients said the bill passed Tuesday is a landmark measure that will educate Virginia patients about the limitations of serologic tests that are used to detect Lyme. If McDonnell signs the measure, the bill could become a model that other states replicate, said Monte Skall, the executive director of the National Capital Lyme Association.

“We worked so hard to get to where we are today,” said Skall, who served on the governor’s Lyme task force. “This was three years in the making.”

The notice further states that a negative test result “does not necessarily mean you do not have Lyme disease” and advises the patient to contact his or her doctor if symptoms continue. The bill also gives physicians immunity from civil liability for providing the written information.

The bill is modeled on a law the General Assembly passed last year requiring radiologists to put information about breast density in federally mandated post-mammogram letters to patients.

The House earlier this month passed an amended version of the bill which only would have required the Department of Health to post the information about Lyme disease testing on its website and encourage physicians to pass the information on to patients.

But the Senate changed the bill to reinstate the notice requirement, which had been in the original legislation introduced by Del. Barbara Comstock, R-Fairfax County. The Senate passed an identical bill earlier in the session. House and Senate negotiators are working on that bill.

“All we’re asking is the information that doctors get from the lab, that that be directly given to the patient,” Comstock said during a floor debate on the bill, as Lyme advocates watched from the gallery.

Republican Dels. John O’Bannon of Henrico County and Chris Stolle of Virginia Beach — both doctors — argued against the Senate version of the bill during Tuesday’s House floor debate. But legislators from Northern Virginia, a region that has seen a rapid increase in Lyme disease cases, argued in favor of the legislation, which passed by a vote of 56-40.

So did Del. James Edmunds, R-Halifax County, who said he is convinced that his father died of untreated Lyme disease in 1988.

“He may be alive today if he had known the test was inaccurate,” Edmunds said. “If this measure can save one life, then I suggest that we support this measure.”